This blueberry french toast casserole recipe is a perfect breakfast for a special occasion. It’s light and scrumptious while still being filling.

I mean, who doesn’t like french toast? It’s incredible stuff! Add to that some superpower berries (yes, I said superpower), and you’ve got yourself an amazing breakfast for a special occasion, or just a normal day of the week. Either way, you’re going to love this. And if you don’t think you can handle 12 servings, make it anyway. You can nosh on it all week and stick the leftovers in the freezer!

And don’t worry, if blueberries are out of season for you, frozen blueberries will work too! Of course, fresh berries are always best. But in a pinch, you can still have your blueberry french toast and eat it too!

Can You Make This Blueberry French Toast Casserole Ahead Of Time?

You can! And there are two ways.

There are many variations for French toast casserole. Most of them revolve around fruit. But there are other options as well. Here are some ideas:

What To Serve With Blueberry French Toast Casserole

This dish does pretty well on its own. But if you want to serve something with it, you could try:

This is pretty adjustable to most dietary needs. Here’s how to make adjustments.

This recipe uses almond milk, or you can use any non-dairy milk you prefer.

Use a good quality, gluten-free bread.

While I haven’t tried these, you could use either a vegan egg substitute or try a flax egg.

While there are naturally occurring sugars in the recipe ingredients here, you do not have to add excess if you prefer not to. Simply omit the honey, and serve this with mashed bananas as a “sauce” to sweeten things up, or enjoy as is with just the blueberries for sweetness.

While this wouldn’t be considered “clean eating”, you could make a low-carb bread to use here, and then use a low-carb sweetener. Everything else would be perfectly fine on a low-carb eating plan.

Use maple syrup instead of honey and use a vegan egg substitute or flax egg.

(Print recipe from recipe card below.)

Unsweetened almond milk – You can use regular dairy milk or other non-dairy milk as well. Use the milk you usually drink.

Honey – You can also use maple syrup, but the finished dish won’t taste as sweet.

Ground cinnamon – Make sure there is no sugar mixed in. You just want cinnamon.

Blueberries – fresh or frozen. But if you use frozen, make sure there is no sugar added.

Mix in the blueberries., then pour the liquid mixture over the bread and allow it to sit for at least 30 minutes, mixing once or twice to be sure all parts of the bread are moistened.

Bake the casserole for about 45 minutes or until there is no longer any liquid between the bread. Cool a bit and serve.

Can You Freeze French Toast Casserole?

Absolutely! It freezes quite well! Make sure you pack it up in an air-tight, freezer-safe container though. If packaged properly, you can freeze french toast casserole for up to two months.

Absolutely! This is an easy-prep breakfast you can make the night before. Let it soak overnight and bake it first thing in the morning! 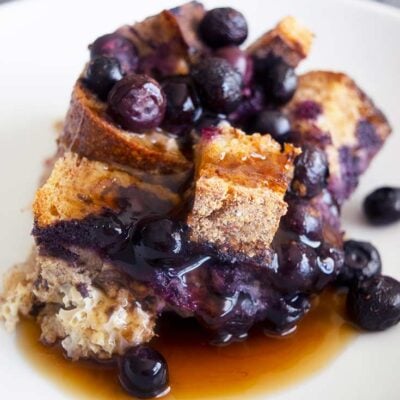 Please note that the nutrition data below is a ballpark figure. Exact data is not possible.

If you’re trying to find an excellent side for your next formulate, this grain salad is an outstanding accompaniment and extremely easy to make. We made an even easier variation of it with our Smoked Lamb Shanks dish, however this goes an action even more and includes more depth of flavour making it ideal for Read More…

Here are the most current food security offenses in Lebanon County, as recorded by Pennsylvania’s Department of Agriculture. Inspections are taken as a “photo” of the day and time, and must not always be taken as general indications of a facility’s tidiness. Infractions are frequently remedied prior to the inspector leaving the website. Dining establishments Read More…