A large proportion of fish meant for human consumption may contain microplastics, scientists have found, with one expert saying that the decision whether to eat fish or not was a “personal choice.”

According to a paper published in the journal Marine Pollution Bulletin, three quarters of fish caught off the coast of southern New Zealand contained some degree of microplastic in their tissues.

Microplastics are tiny fragments of plastic defined as being less than 0.2 inches in diameter.

“75% of fish that I sampled had ingested microplastic. I sampled fish over a two-year period, throughout all seasons, along the south-east coastline of southern Aotearoa (New Zealand), from Oamaru to Te Waewae Bay,” coastal scientist and lead author of the study, Isabella Clere, told Newsweek.

“I found a similar ingestion rate between pelagic (surface dwelling) and benthic (bottom dwelling) fish, which suggests that plastics are ubiquitous throughout the water column and a persistent feature in the ocean.” 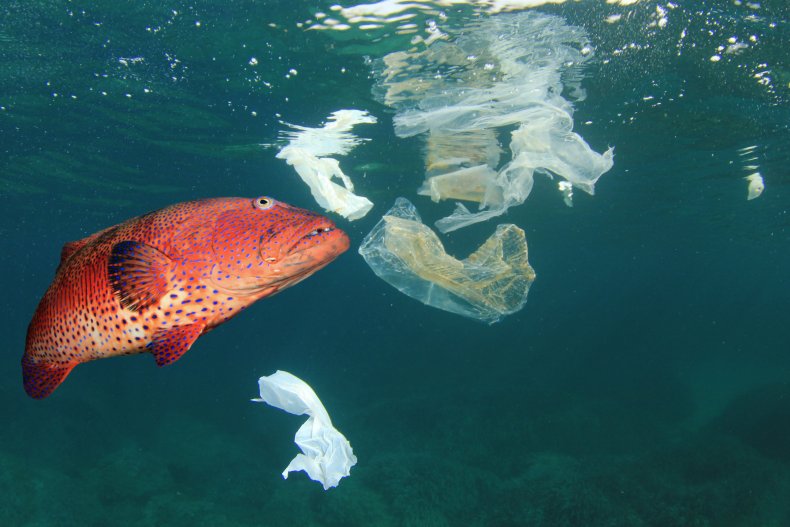 A stock image of a fish swimming in plastic-infested water. A new study has found that three quarters of fish caught off the coast of southern New Zealand contained some degree of microplastic. iStock / Getty Images Plus

According to National Geographic, some microplastics are tiny particles designed to be that size for use in cosmetics or microfiber clothing, while others are a result of the breaking down of larger pieces of plastic caused by environmental degradation.

According to one 2021 estimate from a study published in the journal Microplastics and Nanoplastics, there are roughly 24.4 trillion pieces of microplastic in the world’s upper oceans, with a combined weight of 82,000 to 578,000 tons.

These microplastics find their way into most marine organisms, often by being eaten.

“We looked at a range of benthic (bottom dwelling) and pelagic (surface dwelling) fish and found microplastics in the guts of all species, suggesting the ubiquity of microplastics throughout all ocean layers,” study co-author Bridie Allan said in a University of Otago statement.

“A random selection of fish guts were analyzed to identify the plastic type, with the majority found to be polyethylene, viscose, polypropylene and plastic additives. Polyethylene is the most widely used plastic and also the most prevalent found in the oceans globally,” she said.

“Because the fish were collected over the course of a year, rather than a single time point, this suggests that the presence of microplastics in our southern waters are a persistent feature.”

While a variety of microplastics have been found in fish across the globe, the New Zealand study marks the first time that a similar trend has been observed in the Southern Hemisphere.

“There has been research globally on microplastics in fish, with similar findings to my study. The Southern Hemisphere has had limited research into marine microplastic pollution, with the majority of studies focused on the Northern Hemisphere and around oceanic gyres,” Clere said.

Ocean gyres are large systems of circular ocean currents formed by wind patterns and forces created by the rotation of the Earth.

Microplastics are known to bio-accumulate up food chains, becoming increasingly concentrated in the tissues of predators. This can be damaging to the animals’ health: according to Scientific American, microplastic particles can damage organs by rubbing against organ walls, as well as carrying pollutants on their surface, causing liver damage.

“Generally, with seafood that is eaten whole such as sardines, anchovies, and shellfish, there is a greater risk of secondary transfer of plastics,” Clear said.

“Plastics also contain a suite of chemicals, some of which may be transferred to humans via ingestion. However, there has been very little research carried out to date which has looked at the risks associated with the secondary transfer of plastics and associated chemicals to humans.”

Speaking to Radio New Zealand’s Morning Report Clere said:”We need to be conscious of our plastic use and potential misuse and how that’s getting into the natural environment and potentially affecting ourselves but in terms of eating it, that’s just a personal choice really,”

Microplastics are being increasingly found inside the human body, too. One 2022 study in the journal Environment International found microplastics in human blood for the first time.

“It is certainly reasonable to be concerned,” Dick Vethaak, an ecotoxicologist at Vrije Universiteit Amsterdam in the Netherlands and author of the blood study, told The Guardian. “The particles are there and are transported throughout the body.”

“We also know in general that babies and young children are more vulnerable to chemical and particle exposure.”