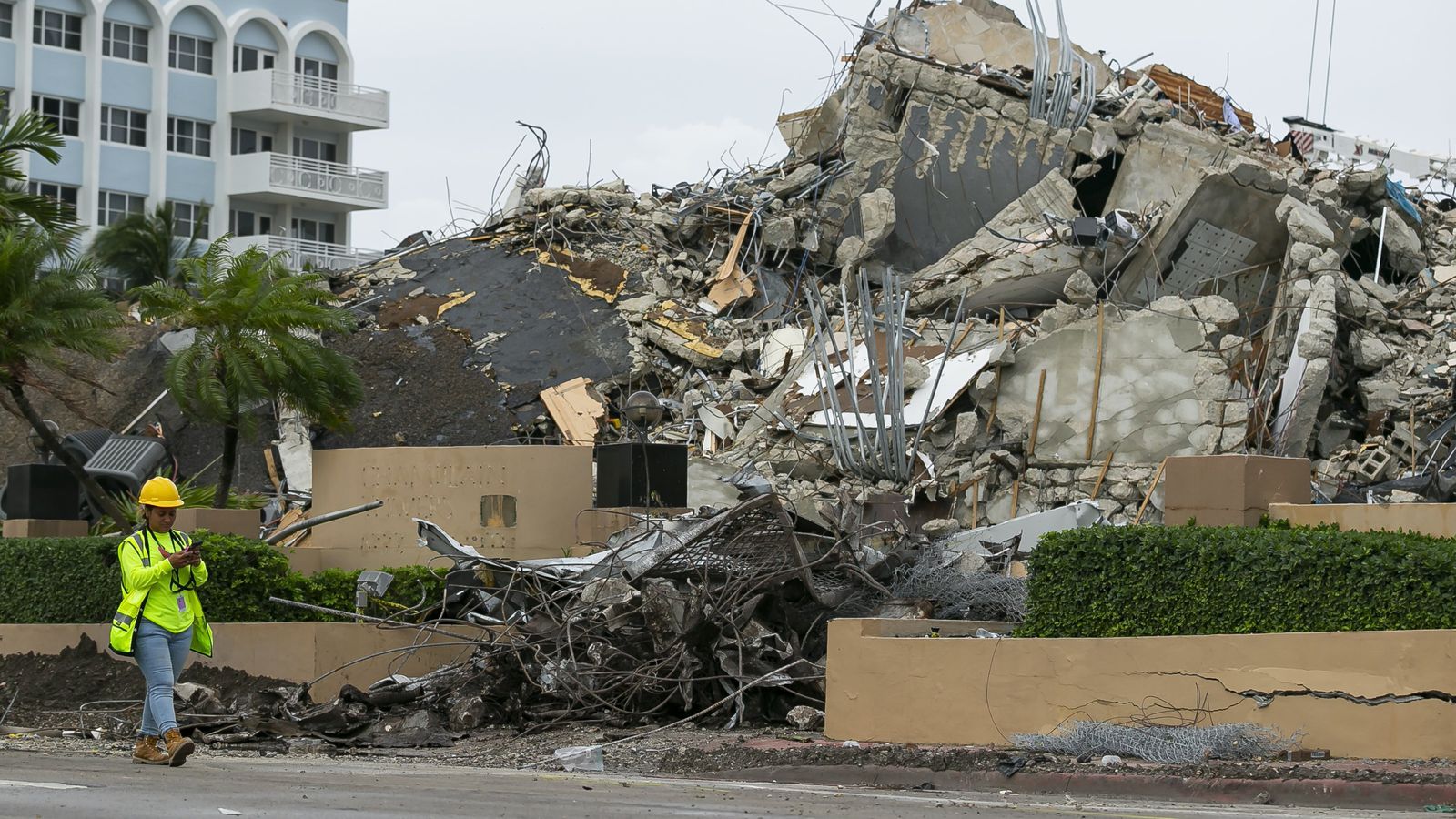 TALLAHASSEE — Gov. Ron DeSantis said Wednesday that condominiums in Florida are “kind of a dime a dozen, particularly in southern Florida,” but he would not commit to any state action to address concerns about the aging buildings, suggesting that Champlain Towers South “had problems from the start.”

Speaking after a briefing on Tropical Storm Elsa at the state Emergency Operations Center in Tallahassee, the governor would not say if he supports calls to require that aging buildings throughout the state be recertified to assure residents of their structural integrity in the wake of the deadly collapse of the 136-unit high rise in Surfside.

The building was going through its 40-year recertification process when it crumbled at about 1:20 a.m. on June 24. Experts say the tragedy has exposed weaknesses in the state’s building inspection process, and some state legislators, structural engineers and insurance agents have suggested that it’s time for the state to update laws that apply to coastal high rises.

The governor was then asked about the impact of the condo collapse on the state’s soaring condominium real estate market. While the exact cause or causes of the collapse of the 40-year old structure probably won’t be known for some time, real estate experts warn that the tragedy has become a concern for would-be buyers of waterfront condos in older buildings.

“I can just say, just having talked with people who’ve been on the scene — people who’ve done stuff — I think this building had problems from the start, let’s just put it that way,’’ the governor answered. “… So I wouldn’t jump to conclusions about it but, at the same time, if there is something identified that would have implications broader than Champlain Towers, then obviously we’re going to take that and act as appropriate.”

Miami-Dade County and several coastal cities in the county have launched their own review of aging buildings since the Surfside tragedy.

On Friday, the city of North Miami Beach ordered the evacuation of Crestview Towers Condominium after a building inspection report found it to have unsafe structural and electrical conditions, and on Saturday firefighters ordered residents to evacuate a low-rise condominium complex in Miami Beach after a building inspector flagged a flooring system failure in a vacant unit and damage to exterior walls.

Sen. Jason Pizzo, a Miami Democrat whose district includes Surfside, said the state needs to update its reinspection process to include more factors, especially for buildings close to the shore line and flood zones. With exposure to corrosive sea salt and vulnerability to sea-level rise, coastal condominiums should be the subject of increased scrutiny in Florida, he said.

Experts say it may take years for a forensic investigation to single out the source of the failure of Champlain Towers South. A 2018 engineering report done for the building’s condominium association detailed “abundant cracking” in concrete columns, beams and walls and said that the lack of proper drainage under the pool deck had caused “major structural damage.”

Six engineering experts interviewed by the Miami Herald said that, based on the publicly available evidence, it appeared {that a} structural column or concrete slab beneath the pool deck likely gave way first on June 24, causing the deck to collapse into the garage below. That may have formed a crater beneath the bulky midsection of the tower, which then caved in on itself, the experts said.

Documents from the Champlain Towers South condo association show that board members disagreed over the assessment for its building repairs, which first were estimated at $9 million and, within two years, grew to $15 million.

In the absence of broader state and county regulation, the insurance industry in Florida has begun its own assessment of its liability in the condominium market. Insurance companies sent letters to owners of condominiums 40 years and older in South Florida last week, asking for proof that their buildings have passed all inspections or they will lose their coverage.

The destruction of the Surfside condo has rattled the insurance industry that had already considered older condos on the coast — with their hurricane exposure, their common ownership structure and reputation for delaying maintenance — a high risk, experts said.

Meanwhile, DeSantis has focused his attention on the rescue and recovery efforts. He spent most of the 13 days since the condo collapse at the building site meeting with leaders of the rescue mission and families of the people still missing.

On Wednesday, the governor said the tragedy will not be forgotten and spoke of the determination of the rescue teams and the outpouring of community support.

“It’s going to be a deep wound for a long time,” he said. “But as tragic as it’s been, I think the outpouring of support has shown a lot of great parts of our community.”

He said the members of the rescue teams from across the country “are leaving a very impressive legacy.”

“They get very invested in it and, so to see that, and to see that that singularity of purpose, has really been heartening.”

He concluded: “I don’t think the state’s ever going to quite be the same. But I’ll tell you. You never want to go through the tragedies but those folks there, you know they are leaving a very impressive legacy.

“And for those who are missing, who have been identified as being deceased, the impact that they’ve had, not just on Florida but through folks all across the country and the world, has really been profound.”

Source: DeSantis won’t commit to review of aging buildings after Surfside tragedy “I think this building had problems from the start, let’s just put it that way,” the governor said of Champlain Towers South.

She Filmed George Floyd’s Final Moments. Now Her Uncle Has Been Killed by a Cop Car.

She Filmed George Floyd’s Final Moments. Now Her Uncle Has Been Killed by a Cop Car.