Crude oil prices idled amid a broad-based lull across benchmark assets as markets continue to reckon with the aftermath of last week’s momentous FOMC policy announcement. WTI initially fell amid broad-based risk aversion as traders worried about sooner-than-expected stimulus withdrawal only to recover that lost floor early this week as comments from Fed officials signaled a lively two-way debate is underway.

Today’s standstill probably reflects a cautious mood ahead of the next key juncture in this story – the release of May’s US PCE inflation data. The core gauge excluding volatile items like food and energy is expected to put price growth at 3.4 percent on-year, the highest in 30 years. That’s up from the 3 percent recorded in April, itself a three-decade peak.

Analogous metrics have pointedly overshot analysts’ forecasts recently, suggesting another upside surprise may be in the cards. Such an outcome may re-energize Fed tightening speculation, weighing on cyclical assets andboosting the US Dollar. That may bode doubly ill for crude oil considering it is quoted in USD terms on global financial markets.

Negative RSI divergence points to ebbing upside momentum, which may precede a crude oil downturn from resistance at 74.42 (50% Fibonacci expansion). Initial support is at 70.30 (38.2% Fib), with a break below that exposing the 66.76-68.00 zone. Alternatively, a push above resistance probably opens the door for a challenge of the next upside barrier at 78.47 (61.8% expansion). 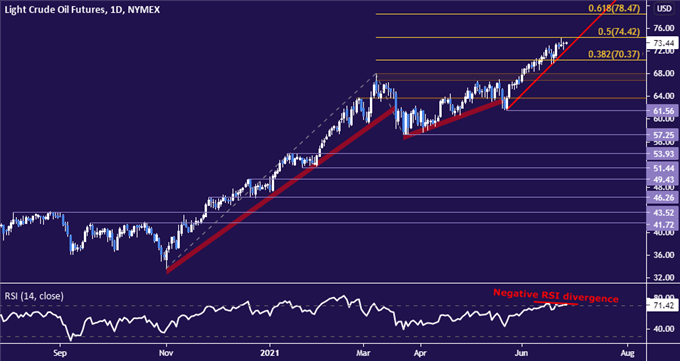 The Supreme Court Just Dealt Another Blow to Voting Rights