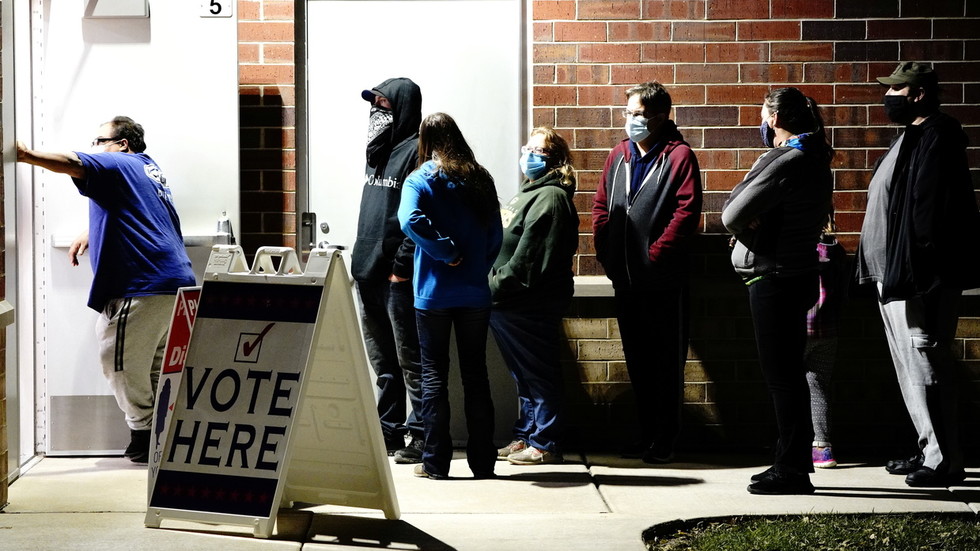 Graham Dockery is an Irish journalist, commentator, and writer at RT. Previously based in Amsterdam, he wrote for DutchNews and a scatter of local and national newspapers.

A collection of 100 “scholars of democracy” have warned that the Republican Party is threatening democracy itself in the US. Ironically, they demand that the Democratic Party fix this by trampling over its opposition.

In a “statement of concern” published on Monday, these “scholars” – political science, government, and journalism professors from American universities – warn that Republican-controlled state legislatures “are transforming several states into political systems that no longer meet the minimum conditions for free and fair elections.”

NEWS:100 leading democracy scholars just issued a powerful new statement warning that our democracy is under dire threat, and that Democrats must pass sweeping federal voting rights protections, ending the filibuster to do so if necessary.Details here:https://t.co/qnT5XTSEUX

These include Texas, where a bill will likely pass that would allow more observers into polling places, criminalize the mailing of unsolicited ballots, and prohibit ballot drop boxes – the latter of which have been associated with so-called “ballot harvesting.” The bill would also restrict after-hours voting, purge voter rolls of dead or inactive voters, and add more ID requirements for absentee ballots.

Republicans say these measures tighten security and prevent fraud. Democrats say they’re racist. The scholars who penned Monday’s letter are in agreement, and compared Republican talking points about protecting the “purity” of the vote to “arguments widely used across the Jim Crow South as reasons for restricting the Black vote.”

The letter calls for a federally legislated expansion of voting rights and access, such as those outlined in HB1, a bill introduced by House Democrats earlier this year. The bill, supported by President Joe Biden and refused a vote by Senate Republicans in 2019, would automatically enroll voters, expand mail-in voting nationally, and prohibit election officials from using certain methods to question someone’s eligibility to vote or remove a person from voting rolls.

The bill would also prohibit “onerous voter identification requirements,” which Republicans and multiple governments across the developed world argue are necessary, at least on some level, to prevent fraud.

While the scholars think these measures are necessary to protect “our democracy,” some of them – particularly the expansion of mail-in voting due to the coronavirus pandemic, a practice banned or heavily restricted around the world – were responsible for the 2020 election devolving from the ‘election day’ of old into a weeks-long ballot-collecting initiative. Though the courts have rejected multiple fraud cases, anecdotal claims remain, and the results of the 2020 election are still doubted by a majority of Republicans and a quarter of all Americans, per recent polling.

Passing HB1 is the remit of Congress, which for all its partisan gridlock is a democratic institution, with checks and balances in place to prevent one party from using a razor-thin majority to pass legislation the other aspect bitterly opposes. The filibuster is one of these checks, and mandates a 60-40 vote majority for most pieces of legislation to pass the Senate. For Democrats, who hold a 51-50 majority when the tie-breaking vote of Vice President Kamala Harris is taken into account, this presents a problem.

We’re witnessing an all-out assault on our democracy — and we need to act swiftly to protect the sacred right to vote.We need the For the People Act and the John Lewis Voting Rights Act.

However, the scholars reckon that the filibuster needs to go, in the name of securing “our democracy.” Republicans, they argue, gave up their right to resist this when they backed former President Donald Trump’s claims of a stolen election.

“We urge members of Congress to do whatever is necessary – including suspending the filibuster – in order to pass national voting and election administration standards,” they conclude, arguing that “our democracy is fundamentally at stake.” A Washington Post writeup on the letter echoes this sentiment, reading: “our democracy’s long-term viability might depend on whether Democrats reform or kill the filibuster to pass sweeping voting rights protections.”

Also on rt.com
‘For The People Act’ confirms it: Our Democracy has officially replaced the American Republic

The phrasing here is important. “Our Democracy” is a term popular among Democrats and their allies in the media, and should be considered distinct from “democracy” writ large, and from the idea of the US as a democratic republic. When the term is invoked by Democrat lawmakers, it’s usually in defense of policy compatible with an expansion of that party’s power, not with the democratic objections of Republicans.

Election interference by foreign powers – the kind Democrats spent four years claiming aided Trump in 2016 – is considered a threat to “Our Democracy.” Interference by Big Tech and the liberal media, which actually happened and arguably influenced the 2020 election, “fortifies” it.