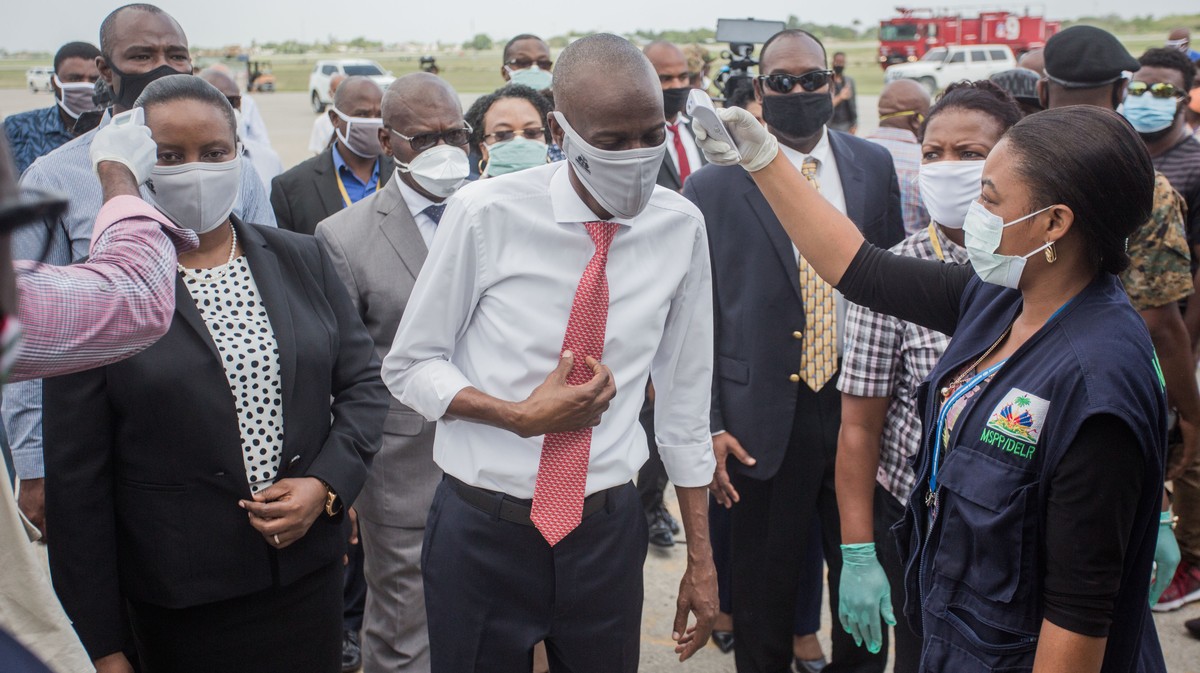 Haitian President Jovenel Moise (C), his wife Martine (L) have their temperature taken on arrival at Haiti’s airport in Port-au-Prince on May 7, 2020. Haiti still has no COVID vaccines. Photo by PIERRE MICHEL JEAN/AFP via Getty Images.

Haiti’s government, mired in political turmoil that has paralyzed the country, has yet to secure a single dose of the coronavirus vaccine.

The poorest country in the Americas, Haiti is eligible for free vaccines from the COVAX initiative, a program backed by the World Health Organization to supply vaccines for middle and low-income countries.

But the government was late in completing some of the legal and bureaucratic steps that COVAX and the vaccine producers require, according to the Pan American Health Organization (PAHO), throwing into doubt when Haiti will receive the first shipment of 756,000 doses of the AstraZeneca vaccine that were expected by the end of May.

The COVAX facility plans to deliver enough doses to vaccinate 20 percent of Haiti’s 11.3 million people by the end of this year, Tristan Rousset, PAHO’s spokesman in Port-au-Prince, wrote in an email. The anticipated first shipment of AstraZeneca vaccines is enough to cover the first three percent of the population.

Haiti is one of 10 countries in Latin America and the Caribbean that will receive the Covax vaccines free of charge. The other nine – Bolivia, El Salvador, Honduras and Nicaragua in Latin America and Dominica, Grenada, Guyana, St. Lucia and St. Vincent & the Grenadines in the Caribbean – have all received their initial doses, according to the PAHO.

In order to receive vaccines, countries must submit detailed readiness and delivery plans to show that they are able to begin rolling out vaccines effectively, according to a spokesman for Gavi, a global vaccine alliance that is part of COVAX.

Just across Haiti’s land border in the Dominican Republic – where the president has proposed building a wall between the two countries – over ten doses per 100 people are being administered, ranking it among the top 10 most vaccinated populations in the Americas. Elsewhere in the Caribbean, Cuba’s biotechnology industry is developing its own vaccine to protect almost the same population size as Haiti.

Despite the initial rollout of vaccines in the region, PAHO’s director Carissa F. Etienne warned on April 9 that production delays by vaccine companies were hampering the agency’s goals for this year.

“Current progress is far from reaching the coverage necessary to protect the most vulnerable groups, about 20 percent of the population, to reduce the high mortality in our region,” she said.

The COVID-19 pandemic is hitting Haiti as the country reels from protests against President Jovenel Moïse. Two years of simmering unrest boiled over in February when his government arrested 23 members of the opposition on charges that they were plotting a coup.

The opposition argues that Moïse should have left office at the end of his five-year term on February 7, but he has responded {that a} 14-month delay in assuming office means that his term will not end till next year.

The Biden Administration has backed Moïse’s assertion, arguing that his term ends next February. The president has effectively ruled Haiti by decree since January 2020 when he dissolved the country’s legislature as legislators’ terms expired. But he recently promised that parliamentary elections scheduled for October 2019 will go ahead in September.

In further upheaval, just this week, Prime Minister Joseph Jouthe resigned, without explanation, after just a year in office. He is the fifth prime minister to resign during Moïse’s administration.

Promised elections, along with the political unrest, could delay the vaccination roll-out beyond 2021, wrote Rousset. Haiti is also particularly vulnerable to the hurricane season, which begins June 1, and that could also hamper the vaccine roll-out.

The political chaos, marked by street protests and sharp increases in crime, has heightened Haiti’s entrenched poverty. In the latest incident, five Roman Catholic priests and two nuns were kidnapped on Sunday and are being held for ransom.

Almost 80 percent of the population lives on less than $5.50 a day according to the World Bank. The United Nations’ representative in Haiti, Helen Meagher La Lime, said in February that an estimated 4.4 million Haitians will need humanitarian assistance this year as food insecurity grows.

The continuing violence and concerns that Moïse is amassing power has overshadowed the threat posed by the COVID pandemic in Haiti.

Official numbers are low in comparison to neighboring countries. Haiti has reported 12,855 COVID-19 cases and just 251 deaths, according to Johns Hopkins University Coronavirus Research Center data. Given the country’s anemic health care system, it is difficult to gauge the extent to which cases and deaths are under-reported. Rousset said that Haiti is one of a number of countries where the pandemic has proven less severe than anticipated, but that it is still unclear why the affect has appeared to be less acute.

Many Haitians don’t believe the novel coronavirus is as dangerous as authorities say it is, AP reported. They have turned to homegrown remedies concocted by Vodou authorities, a choice spurred as a lot by trust in folk healing as the lack of access to formal healthcare.   Vodou is a local mix of African, European and indigenous Taíno religious practices and beliefs.

A year into the pandemic the government is making little effort to halt activities that would slow transmission of the virus. In February, Haiti went ahead with a three-day Carnival celebration in the coastal city of Port-de-Paix. The annual celebration combines religious elements of Christianism and Vodou.

Source: The Poorest Country in the Americas is Still Waiting for Vaccines

A GOP senator’s dumb, reckless, and immoral words reflect a disturbing fact about the American mind