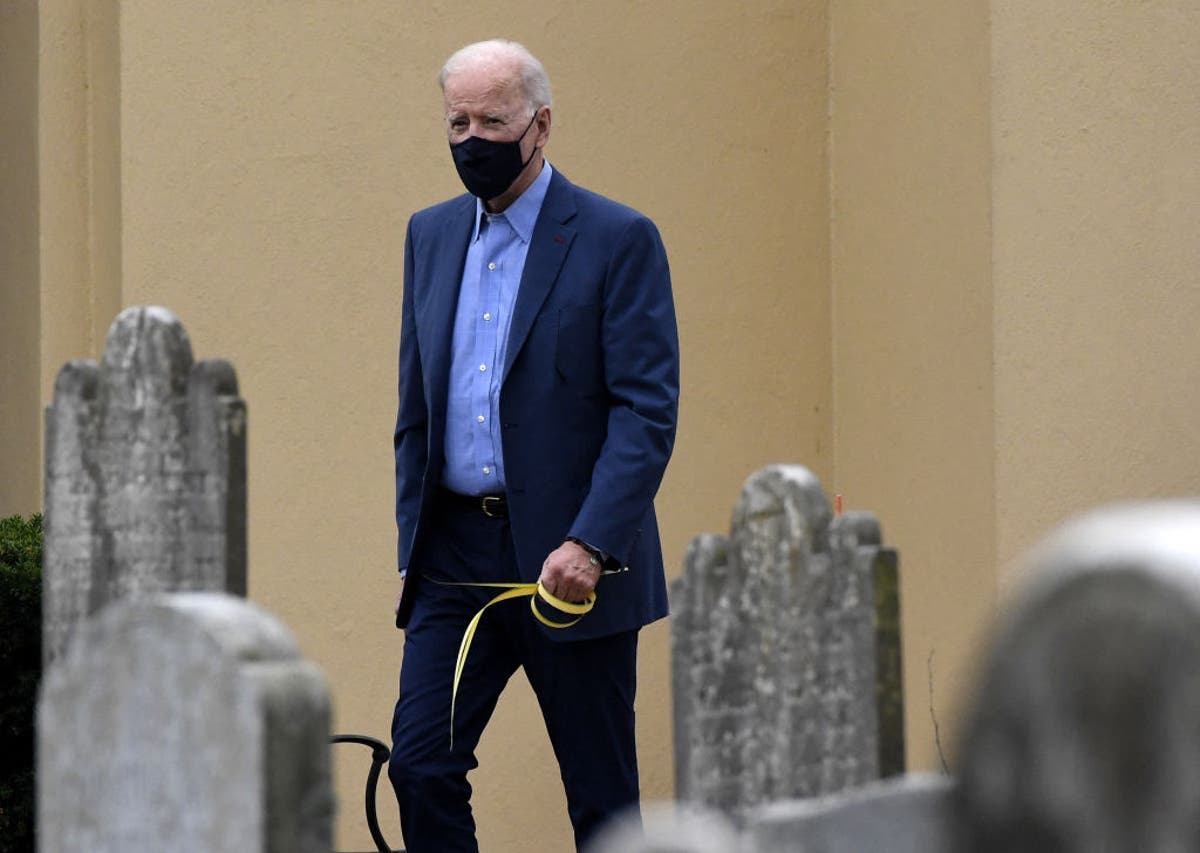 Jen Psaki, Joe Biden’s White House press secretary, has defended the administration’s handling of the resurgent migrant crisis at the US-Mexico border, saying it remains closed for now and that families are being turned away, but that the president’s team are working on “solutions” to tackle the sharp uptick in appeals for asylum.

Donald Trump has meanwhile given yet another cellphone interview to Fox News, this time telling Jeanine Pirro he plans to visit the border “over the next couple of weeks” to survey the consequences of four years of “zero tolerance” policies under his leadership.

Mr Biden found himself accused of inaction on the issue on Saturday Night Live last night in a sketch in which he was portrayed as more interested in handing out stimulus cheques and allowing his German shepherd Major to savagely maul Kamala Harris’s husband Doug Emhoff.

In brighter news for the president, a large majority of Americans approve of his handling of the Covid-19 vaccine rollout and the economic recovery according to new polling.

Mr Biden is spending the weekend at his home in Delaware and attended a Palm Sunday service at St Joseph on the Brandywine Catholic Church.

Good morning and welcome to The Independent’s rolling coverage of the Joe Biden administration and the wild world of American politics.

Donald Trump has given yet another cellphone interview to Fox News, this time telling Jeanine Pirro he plans to visit the US-Mexico border “over the next couple of weeks” as the country faces a fresh immigration crisis following four years of “zero tolerance” policies under his leadership.

Quite what he proposes to do there beyond strutting around pretending to be concerned and lamenting his lost border wall remains to be seen.

His adviser Jason Miller trailed the same announcement in a latest podcast interview, on which Justin Vallejo has more.

Joe Biden found himself accused of inaction on the immigration crisis on Saturday Night Live (SNL) in a sketch in which he was portrayed as more interested in handing out stimulus cheques and allowing his German shepherd Major to savagely maul Kamala Harris’s husband Doug Emhoff.

Alex Moffat did a much less weird job on the president than Jim Carrey managed during the campaign (but not as fine as Dana Carvey) while Maya Rudolph and Martin Short starred as Harris and Emhoff.

While Chloe Fineman won praise for her turn as a Bushwick hipster Ella Emhoff, it was Aidy Bryant who surely stole the show as Ted Cruz: “My only crime is loving too much – and sedition.”

Biden’s secretary of state Anthony Blinken has hit out at China for its latest round of sanctions against American and Canadian officials including Gayle Manchin, chair of the United States Commission on International Religious Freedom and wife of Democratic senator Joe Manchin, over the body’s criticism of the country regardining its treatment of the Uighur Muslim minority in Xinjiang.

“The United States condemns the People’s Republic of China’s (PRC) baseless sanctions on two US Commission on International Religious Freedom commissioners apparently in retaliation for US sanctions on PRC officials connected with serious human rights abuse in Xinjiang,” Blinken said.

“Beijing’s attempts to intimidate and silence those speaking out for human rights and fundamental freedoms only contribute to the growing international scrutiny of the ongoing genocide and crimes against humanity in Xinjiang.”

He was joined in expressing his outrage by Canadian prime minister Justin Trudeau:

Nathan Place has this on China’s actions.

Also on foreign policy in Asia, Biden’s defence secretary Lloyd Austin and nearly a dozen of his counterparts have condemned the deadly use of force by Myanmar‘s security forces and say the country’s army has lost credibility with its people since the coup that saw it take power on 1 February.

News reports and witnesses said local forces killed 114 people on Saturday, including some children, on Armed Forces Day – the bloodiest day of its crackdown on pro-democracy protesters so far.

The Independent’s redoubtable Andrew Buncombe is in the wars again, this time managing to annoy the South Carolina senator by having the temerity to ask what the GOP would do differently to address the border crisis it is so busy denouncing after four years of its own man in the White House making matters worse.

“Instead of asking a Republican or a Democrat, why don’t you ask the people in charge of policing the border, what the problem is, rather than making a political statement and a question. Why don’t you walk right over there, ask the guy ‘What the hell happened’,” Lindsey Graham snapped during a Republican publicity tour of the Texas border.

The New York state attorney basic’s office has reportedly subpoenaed dozens of Cuomo administration staff in connection with the probe into allegations of sexual harassment against the governor.

Staffers have been asked to produce documents as well as submit themselves for interviews, according to reporting by The Wall Street Journal, which says that Cuomo’s top aide, Melissa DeRosa, is among those subpoenaed by AG Letitia James.

Oliver O’Connell has the latest.

The online retail giant has increasingly been picking fights on Twitter with Democrats including Bernie Sanders, Elizabeth Warren and Mark Pocan as its staff vote on forming their first union at a packing facility in Alabama.

But it’s New York progressive Alexandria Ocasio-Cortez who has been hitting back, with characteristic vim.

Nathan Place has the story.

Jen Psaki has been talking to Chris Wallace on Fox News Sunday and had this to say on the border (also denying conservative claims the administration was trying to keep the media at bay) before making an appeal for Republican co-operation on voting rights following the outcry over new restrictions in Georgia.

On the latter subject, Chuck Todd’s scorching introduction to this morning’s Meet the Press on NBC is nicely worth checking out.

Lindsey Graham: ‘Every time a Republican does anything, we’re a racist’

Psaki is followed on Wallace’s show by the aforementioned Senator Graham, who says that white conservatives are the real victims here, that certain aspects of Georgia’s voting laws don’t make sense and that, should an apocalyptic natural disaster strike South Carolina, he’ll shoot any looters who comes near his house with his trusty AR-15.

Stocks making the biggest moves in the premarket