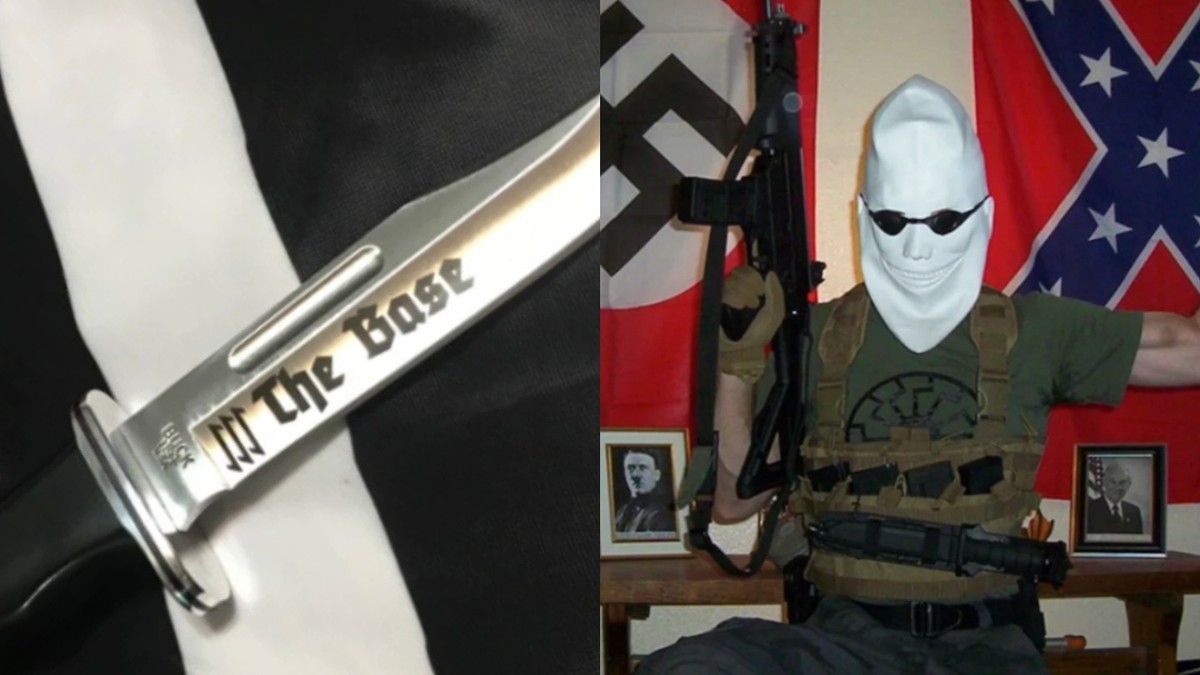 The Base, a militant American neo-Nazi terror group with designs on establishing a white ethnostate, has been recruiting members in Australia.

A cache of leaked audio recordings and internal files reveal interviews with a number of Australia-based applicants who attempted to join the white supremacist organisation in recent years—including former political candidates and well-known members of local neo-Nazi groups.

The Lads Society, a far-right white nationalist extremist group founded by several former members of the United Patriots Front (UPF), is one such group that was targeted by The Base. The Society of West Australian Nationalists (SWAN)—run by former Liberal Party volunteer David Donis—is another. A fringe member of SWAN was appointed as The Base’s Australian leader, and pledged to US leader and founder Rinaldo Nazzaro that he would use the Perth-based organisation as a recruiting ground. Captured in the audio recordings are the unnerving details of that recruitment process.

Established in the US in mid-2018, The Base is a militarised coalition of extremists, activists and trolls united by a common impetus to wage a pro-white “race war” and trigger the collapse of liberal democratic governments around the world. It is, as VICE has previously reported, a bonafide terror group, with over 50 members, operating both in the real world at paramilitary training camps and online using encrypted apps. Nazzaro, a 47 year-old American and ex-Pentagon contractor who previously operated under the pseudonyms Norman Spear and Roman Wolf, has allegedly lived in Russia for the past several years. Some suggest he is a Kremlin asset. He, for one, disputes these allegations.

Shortly after its creation, VICE News broke the first story on The Base and authorities began circling. In 2020 the group was infiltrated by the FBI. Last month it was listed in Canada as a terrorist organisation, while several of its US members stand accused of federal hate crimes. And according to law enforcement sources, the increasingly globalised organisation—currently active in the US, Canada, South Africa, and the United Kingdom—has also been of interest to Australian Federal Police (AFP) counter-terrorism teams.

Leaked recordings, obtained by US-based investigative journalist Jason Wilson and provided to the ABC and Fairfax, reveal how The Base searched for and targeted Australian recruits who had access to firearms, security licences and combat training. Among the would-be Australian members was a 17-year-old high schooler, from Canberra, and at least three applicants who expressed support for the New Zealand mosque massacres.

Another was Dean Smith, a former member of Pauline Hanson’s One Nation political party who once ran for a seat in Australia’s federal parliament. Smith told recruiters from The Base that he was ready to offer himself up as a “foot soldier”.

The Australian recruitment vetting process involved several email exchanges, written applications and record-keeping, during which an applicant was given a standard set of questions about their ethnicity, physical fitness, ideological pathway and experience in combat. They were also asked whether they’d read Mein Kampf.

“What [Nazzaro] was doing with this group was talking to people half his age and in a lot of cases, as it turned out, ruining their lives,” Wilson told the ABC  “A lot of younger guys who are involved in [The Base] are in the middle of trials for things they’ve done in this group.”

In recorded conversations with the 17-year-old applicant, Nazzaro claimed that The Base was “trying to increase our presence” in Australia and “if you join, we’re going to look to you to kind of help in that regard”. The teen responded: “Well, I’ll finish school after next year, so I should be all good for that.”

“We have barely a toehold right now in Australia,” Nazzaro said in another recording. “We need to change that to a foothold.”

These exchanges were often facilitated by an Australian member operating under the pseudonym “Volkskrieger”—German for “People’s warriors”—who in 2019 became the chief recruiter for The Base in Australia, and whose identity has not yet been confirmed.

In a separate conversation, another Australian applicant told Nazzaro and Volskrieger that “What I would like to see is basically a group of networked survivalists across the country with … legal access to firearms.” That applicant, a 36-year-old Perth resident who went by the online pseudonym “AdvocateCannibalism”, further famous that he was a licensed firearm owner and was “not afraid to bottle a cunt and stab his mates with the leftovers”.

Such violent fantasies are not extraordinary in the organisation’s parlance. According to records reviewed by VICE News last year, one of the dominant topics of conversation in online Base chats was “the Boogaloo”—which, in their minds, meant a chaotic race war in which the group could slaughter “degenerates” and minorities (the Boogaloo has grown into its own movement). During these overt discussions about a race war, the group would fantasize not about their eventual all-white homeland but about conducting paramilitary-style raids on locations, or executing Black men, race traitors, or journalists. The group bonded over their dreams of violence and conflict, revelling in the speculation of what they would do when it finally happened.

It’s not clear whether any of the applicants heard in the recordings are currently members of The Base—but the audio files seem to underscore the Australian Security Intelligence Organisation’s (ASIO’s) warnings that ideological extremism is on the rise in Australia. ASIO revealed last year that up to 40 percent of its priority caseload involved right-wing extremist groups, and in January, following a widely publicised cross-burning ritual by a group of white supremacists in a national park outside of Melbourne, recommended that a number of extreme right-wing groups be declared terrorist organisations.

Those proposals have so far been unsuccessful, hindered by Australia’s relatively narrow legal definition of what exactly constitutes “terrorism”. The recordings indicate, however, that were ASIO to proscribe The Base as a domestic terrorism group—thus outlawing people from becoming members and supporting it—it would deal a major blow to the local organisation. In the words of one of The Base’s leaders, that would be a “game changer”.

Source: US Neo-Nazi Group ’The Base’ is Recruiting Members in Australia