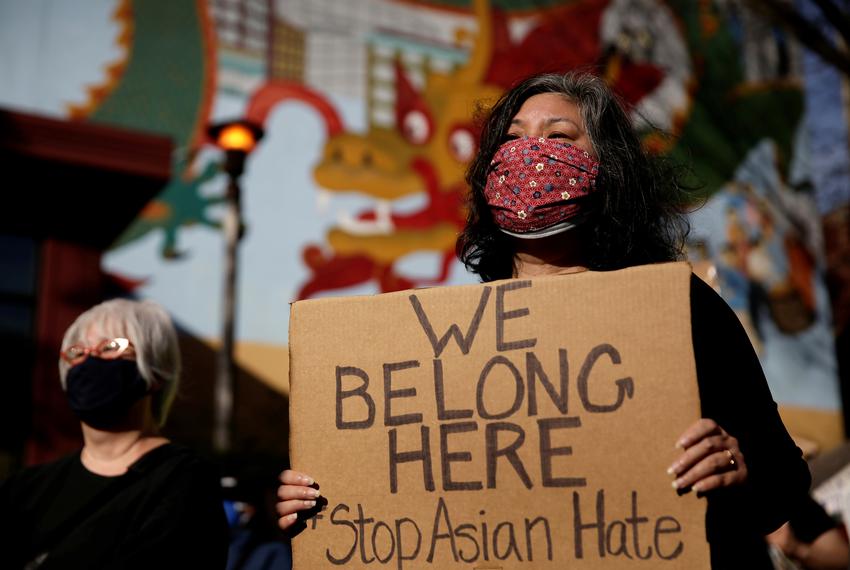 Sign up for The Brief, our daily newsletter that keeps readers up to speed on the most essential Texas news.

San Antonio resident Mike Nguyen is afraid to be outside these days. Earlier this week, he was driving with his colleague when they pulled over to help someone pick up boxes, but he froze up when they parked the car on the side of the street.

He couldn’t leave the car. It’s not that he didn’t want to help. It was the death threats he had received recently that kept him in.

“I can’t even go out and help a fellow person in the community because I’m afraid that I might get attacked,” said Nguyen, whose restaurant was vandalized and spray-painted with racist slurs after he spoke out against Gov. Greg Abbott’s lifting of a statewide mask mandate. “I’m not stepping out of this car right now.”

Nguyen said that while he was angry over the racist attack on his business, news of a gunman killing eight people — including six women of Asian descent — at three spas in the Atlanta area has added a heightened sense of fear to the already complicated mix of emotions he’s feeling.

“I’m emotionally tired. I’m angry. I’m frustrated,” he said. “I think a lot of Asian Americans are frustrated that you see these crimes happening, but nothing’s happening. There’s no stop to it, and people are trying to make it that it’s not a hate crime.”

Cherokee County authorities identified the four victims of the shooting at Youngs Asian Massage in Acworth, Georgia, as Delaina Ashley Yaun, Paul Andre Michels, Xiaojie Tan and Daoyou Feng, according to media reports. The only survivor of the shooting, Elcias R. Hernandez-Ortiz, remains hospitalized with significant injuries. On Thursday, Fulton County officials named the victims from the other two shootings as Soon C. Park, Hyun J. Grant, Suncha Kim and Yong A. Yue.

The attacks in Atlanta are the latest in a wave of increasing assaults in the U.S. targeting Asians during the global COVID-19 pandemic. As the virus spread, the anti-Asian hostility climbed. Former President Donald Trump regularly referred to COVID-19 as the “Chinese virus.” For over a year now, Asian Texans have battled a heightened sense of fear on top of disproportionate job losses and business closures during the pandemic. A recent Pew Research Center study even found that 58% of Asian Americans say that people more commonly express racist views toward their group since the pandemic began.

Stop AAPI Hate, an organization founded during the pandemic to track incidents of anti-Asian discrimination, received 3,795 reported incidents of racism against Asian Americans and Pacific Islanders across the United States between March 19, 2020 and Feb. 28, 2021. Of those attacks, 68% targeted Asian women, according to the group’s most recent report.

In Texas, Stop AAPI Hate has tracked 103 anti-Asian racist incidents that have occurred since March 2020, when a native of Myanmar and his two sons were stabbed in a Midland Sam’s Club by a man who believed the father was Chinese and spreading the coronavirus in the store.

Asian Texans have also reported verbal abuse and being spit at and coughed on, according to the group.

“Actually, I don’t feel safe anymore,” said a Chinese American Austin resident who spoke on condition of anonymity because she feared that she could be targeted. She said that last month, a white man driving past her stuck out his middle finger at her for no reason.

“Even when I’m driving inside my car, I cannot take off my mask. I have to put it on,” she said. “I don’t want those things to happen again. I really don’t know if they have a gun, if they’re gonna shoot me any time. I don’t know. I just feel like it’s a trauma.”

In Houston, the Police Department launched a statement Wednesday announcing a plan to increase patrols in certain neighborhoods and to organize a city hall to address concerns about anti-Asian hate crimes.

Amy Zhang, a Ph.D student in sociology at the University of Texas at Austin and a researcher for the AAPI COVID-19 Project, said that pandemic-related racism and more cautious tendencies among the Asian population combined to impact the Asian community harder and earlier than other groups.

“People were experiencing things, especially early on, that were very much this racialization of being Asian as contagion, where just existing in public while Asian was kind of seen as a threat to some people,” said Zhang. (Zhang previously worked for the Texas Tribune as a fellow.)

This kind of racialization of a disease can result in material impacts like unemployment increases, rises in depression and anxiety rates and a distrust of other people, according to Kara Takasaki, another UT-Austin Ph.D student and analyst for the AAPI COVID-19 project.

Amy Mok, the founder of the Asian American Cultural Center in Austin, also added that labeling the virus as Asian will impact the social reality for Asian Americans for many months, and possibly years, to come.

“There are questions from our children we do not know how to answer, when they ask, ‘Why do they hate us so much? Why do they call it Chinese virus or Kung-flu virus?’” Mok said. “So it is very hard for kids. And then they go back to school and they have their friends, young friends, saying ‘Oh, you are the Chinese virus.’”

And with Tuesday’s attack in Atlanta targeting Asian women, the intersection between misogyny and anti-Asian discrimination remains ever-present in Texas and across the country. The labels that people attribute to Asian women perpetuates a culture of hypersexualization, Mok said.

A harsh reality and an uncertain path forward

Takasaki noted how structural racism within a society ultimately cuts off a population’s access to basic resources like federal assistance and health insurance, which in turn can lead to a lack of solutions when people’s mental and physical health worsens.

Asian American businesses often face a much longer road to recovery after a crisis or disaster, according to Russell Jeung, a San Francisco State University professor and one of the founders of Stop AAPI Hate. Asian restaurants and stores took the longest to recover after the 2008 recession, Jeung said, adding that Chinatowns across the country were already experiencing economic problems before the pandemic from the effects of gentrification.

“Asian Americans have really been hit hard with joblessness during COVID-19, and that’s partially due to a lot of us work[ing] in the service sector, and those businesses have closed down,” Jeung said. “Secondly, a lot of us work in ethnic enclaves and ethnic neighborhoods, ethnic markets, and because of racism, people have shunned going to Chinese restaurants, Vietnamese nail salons, and so those businesses have had to close.”

State Rep. Gene Wu, D-Houston, said that while he hasn’t directly seen any incidents of discrimination taking place in his district, some residents may be afraid to report experiencing racism. He recently introduced a resolution in the Legislature that expresses support for eradicating racism and calls on law enforcement to fully investigate any reported incidents of anti-Asian hate.

“Asian American businesses have suffered not so much because of direct discrimination, because of race, but because of the poor handling of the response to COVID,” Wu said. “Is there a component of businesses are not doing well because people don’t like Asian people? I’m sure that’s there, but there’s no way for me to quantify that.”

Several business owners told The Texas Tribune that hostility toward Asian Texans and the struggles of the service industry during the pandemic have made them question their line of work.

“There are days where you get up, and you literally don’t feel like doing anything because it just seems like there’s so much burden, and it’s just easier not to think about it,” said Kristina Zhao, the owner of Sichuan House, a San Antonio restaurant.

Alice Lee, the executive director of the Southwest Management District in Houston that includes the city’s Chinatown, added that the pandemic combined with the rise in discrimination has hit Asian women the hardest, especially in the wake of this week’s attacks in Atlanta.

“His attack against Asian women is just horrific. It’s really women who have lost the most during the pandemic,” Lee said. “They are the ones who lost the most jobs. They have to stay home while their kids do online learning. They can’t really pivot to other employment, so really that’s a double or triple whammy for women in general.”

High unemployment rates and anti-Asian discrimination have also worsened institutional inequities when it comes to other areas of life like access to health care and work satisfaction, according to Zhang and Takasaki.

Beyond the wave of violence, there’s the outsize impact of the pandemic on Asian workers. Between March 2020 and January 2021, the Asian population in the state filed an average of 31,908 claims per month, representing an annual increase of 1,087%, according to data from the U.S. Department of Labor. That rise in unemployment far outpaced the increases experienced by all other racial groups in the state, although around 45% of claims since March 2020 did not report the applicant’s race.

Unemployment claims filed by Asian Americans increased by over 2,000% between May 2019 and May 2020 ­­— more than double the increase of the general Texas population

Note: 46% of unemployment claims from March 2020 to January 2021 were filed without a specified race. They are included in the All Texans category.