Wall Street will turn an eye to US retail sales for February, slated to cross the wires Wednesday, with analysts expecting a 0.5% drop versus the prior month, according to the DailyFX Economic Calendar. A better-than-expected figure will likely add to the economic rebound story as vaccine progress in the United States continues to progress.

The vaccine rollout in the United States has seen better progress than initially expected. More than 109 million doses have been administered so far in the US, according to Bloomberg. Markets will also be watching the Federal Reserve as the central bank begins a two-day meeting when it will announce a decision on interest rates later this week. 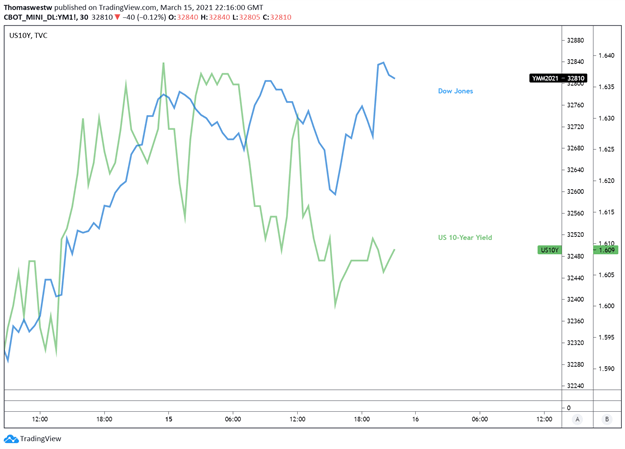 Learn how to become a more consistent forex trader

Tuesday’s economic calendar shows minutes from the most recent RBA meeting and industrial production data out of Japan. Hong Kong and South Korea will release unemployment data. Bank of Japan (BoJ) Governor Haruhiko Kuroda is set to give a speech at the FIN/SUM conference. Later this week, the BoJ will announce its interest rate decision when some suspect that the central bank will announce a phasing out of its target on asset buying.

The US Dollar has seen a significant strengthening versus the Japanese Yen as the global reflation trade heats up, driving investors out of the safe-haven Yen. USD/JPY is up nearly 2.5% since the start of March, and upside momentum may drive prices higher. A Golden Cross formed this week, with the 50-day Simple Moving Average (SMA) crossing above the longer-term 200-day SMA.

The bullish signal may help propel prices higher after the bullish signal’s completion despite an already overbought reading on the Relative Strength Index (RSI). A pullback, however, could see prices drop to the 78.6% Fibonacci retracement level. To the upside, the June multi-month high is now in focus at 109.851